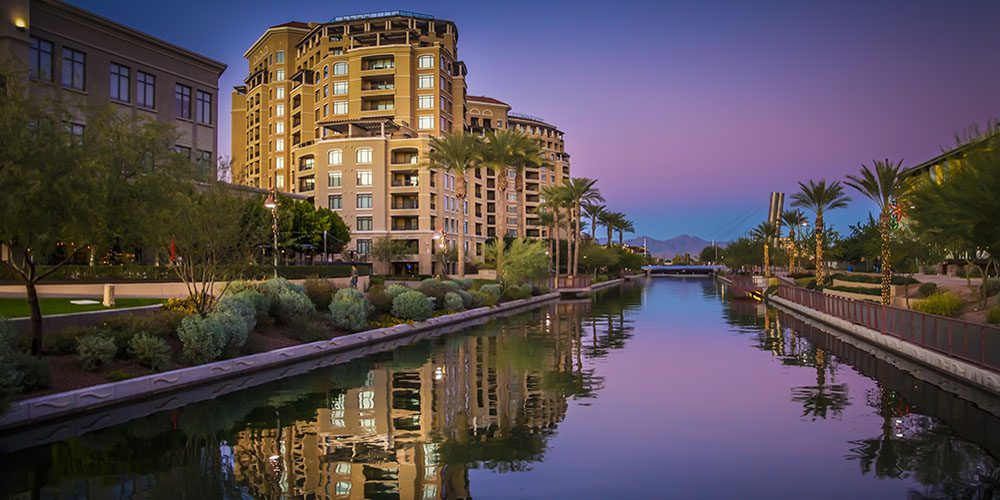 Scottsdale is a city in the eastern part of Maricopa County, Arizona, adjacent to the Greater Phoenix Area. Named Scottsdale in 1894 after founder Winfield Scott and incorporated in 1951. The New York Times described downtown Scottsdale as “a desert version of Miami’s South Beach” and as having “plenty of late night partying and a buzzing hotel scene.” Its slogan is “The West’s Most Western Town.”

Scottsdale, 31 miles long and 11.4 miles wide at its widest point, shares boundaries with many other municipalities and entities. On the west, Scottsdale is bordered by Phoenix, Paradise Valley and unincorporated Maricopa County land. Carefree is located along the western boundary, as well as sharing Scottsdale’s northern boundary with the Tonto National Forest. To the south Scottsdale is bordered by Tempe. The southern boundary is also occupied by the Salt River Pima-Maricopa Indian Community, which extends along the eastern boundary, which also borders Fountain Hills, the McDowell Mountain Regional Park and more unincorporated Maricopa County land.

The tourism industry is Scottsdale’s primary employer, accounting for 39% of the city’s workforce. In 2005, Scottsdale attracted over 7.5 million visitors to the city, providing an economic impact of over $3.1 billion. The city of Scottsdale by itself is home to more than 70 resorts and hotels, boasting over 15,000 hotel rooms. This large hospitality market primarily caters to a higher-end, white-collar demographic.

Find Your Way Around Scottsdale