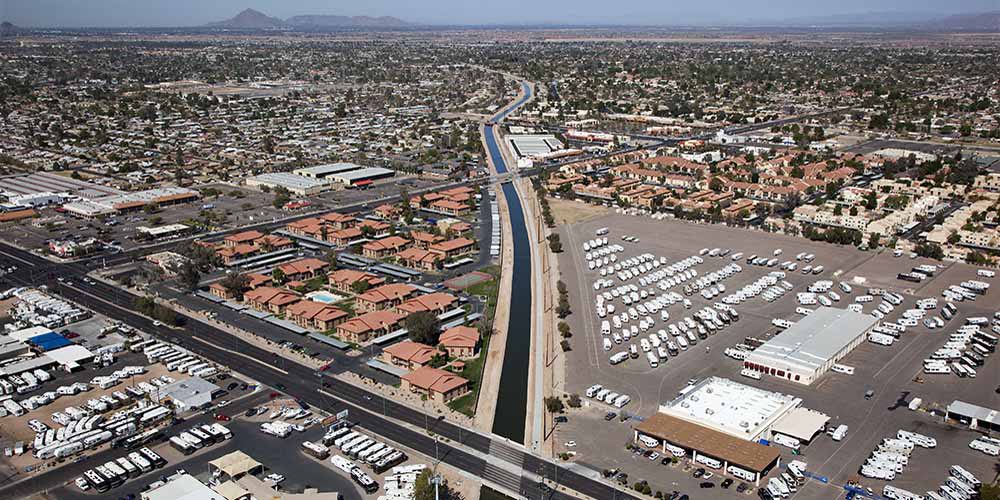 Layton Lakes is a neighborhood in Gilbert, Arizona. Gilbert is a town in Maricopa County, Arizona, United States, just southeast of Phoenix, within the Phoenix metropolitan area. Gilbert is currently the most populous incorporated town in the United States. Gilbert was recognized in 2010 as the “36th Best Place to Live in the nation”, as well as among the nation’s “top places to live and learn” by GreatSchools.org. Washington-based C.Q. Press rated Gilbert the “safest municipality in Arizona, and 24th safest in the nation,” in their annual report released November 2009 using FBI statistics. Gilbert’s Cosmo Dog Park has twice made Dog Fancy magazine’s list of top dog parks in the nation since opening in 2006, including being named Dog Park of the Year in 2007. The Riparian Preserve at Water Ranch is recognized by the National Audubon Society as being an “Important Bird Area”. Gilbert has been named as a “bicycle-” and “tree-friendly” community and receives “high satisfaction rates” from citizens in town surveys.

Today, Gilbert encompasses 76 square miles and has made a rapid transformation from an agriculture-based community to an economically diverse suburban center located in the southeast valley of the Phoenix metropolitan area. In the last two decades, Gilbert has grown at an extremely high rate, increasing in population from 5,717 in 1980 to 208,453 as of a 2010 Census Bureau estimate. Gilbert has evolved into a highly educated and affluent community supporting high-wage jobs in life science and health services, high technology, clean and renewable energy, and corporate and regional headquarters/offices in advanced business services.

Find Your Way Around Layton Lakes